Having conducted the pre-poll study in all the 294 Assembly Constituencies in Bengal, where after two reports, underlying the methodology of the study, ground scenario, the shifting political dynamics as well as the expected seat prediction for various parties were mentioned in detail, Peoples Pulse and India TV, undertook a second round of study of the state to come up with Exit Poll predictions. It would be desirable to study this report along with the previous two studies which are available on the website of People’s Pulse.

For the sake of coherence, it was decided that rather than doing a sub-region wise study as has been the case in the previously, a phase wise mapping of the political mood at the assembly constituency level would be more useful. The overall finding are not much different from the previous ones, though there are certain shifts which unambiguously reveal a popular mood for change. Therefore, at the outset, it is pertinent to mention the shifts which we observed in the respondents’ articulations as compared to my previous visit.

Regime Change as a Positive Phenomenon along with Anti-Incumbency

Based on the two round of our field study, it can be confidently inferred that there is a popular mood for change. However, there seemed to be an additional factor emerging on top of the prevailing anti-incumbency– the normalization of the reasoning of a frequent transfer of power was invoked by a significant section of the respondents. At many places, people passionately argued about the desirability of change as a welcome phenomenon in Bengal. In lieu of their argument which outlined the virtue of regular transfer of power from one party to the other, majority of respondents substantiated their statement by citing the example of Kerala. Further, this normalization of the logic of change of power at regular intervals had a typical template, namely, Left got chance to rule for 34, years, the Trinamool for 10 years, let’s give the BJP a chance for 5 years.

The Depleting Fear Factor on the Ground

The forthrightness of the respondents were primarily on account of the sense of assurance that with the thick deployment of the central forces, the chances of electoral rigging or political reprisals would be minimal. Ironically, another factor which lead to the depletion of fear factor came out to be the massive shift of the Trinamool leaders to the BJP majority of who were perceived as the political villain. Justifying their choice to support the turncoats, the pro-change respondents argued that at the moment change is their prime concern. This signify a deeper shift taking place in the political psyche of the state wherein there is a visible impatience with the prevailing culture of rewarding a political party for longer stint. In fact, this change in the political culture of freeing up the democratic spaces from the suffocating clutches of the ruling parties who subsume all sphere of everyday life within their complex maze, is partly accountable for entrenching the prevailing mood for change. Thus, as a significant change, the relative weakening of the political party structure may end up freeing the suppressed space for the autonomous civil-society and activists who at present are at the margins.

An Increased Degree of Openness and Articulation

Further, seen from the framework of political psychology, there was a visible change in the body language and articulations of the majority of respondents who were making a case for regime change. There was more openness and confidence in their political opinions as compared to the state of affairs four months ago. In fact, majority of the respondents in rural areas were forthright in their response.

The Common Sense that Change is in the Air

In fact, it was noteworthy that a perception that this time Bengal may witness a regime change emerged as a dominant factor on the ground. While the pro-BJP respondents were more confident, the pro-Trinamool section were relatively less assertive about the winnability chances of the incumbent regime. In fact, there were a section of pro-Trinamool respondents who while defending the incumbent regime and the leader, conceded that this time BJP may spring a surprise. That BJP has emerged as a serious bidder for power emerged as a unanimous opinion. This has a debilitating and demotivating effect on the ground workers and the cadres of the Trinamool Congress. On the other hand, this pro-change sentiment had taken such a deep root that even in constituencies with demographic challenge, say like, Minakhan in Basirhat Lok Sabha in N-24 parganas, wherein a BJP victory would be quite difficult, the pro-change respondents were quite assertive that their seat would also witness a saffron victory as change is in the air. The emergence of this pro-change perception as the dominant factor on the ground seemed to have emboldened the respondents to be more assertive in their political articulations.

Further Consolidation of the Minorities behind the Trinamool

As has been observed in the previous study and mentioned in the past reports, there wasn’t much split among the minority votes, barring few seats at districts like South and North 24 Parganas, Howrah and Hooghly. Rather, there seemed to have a further consolidation of the Muslim minority votes behind the Trinamool Congress. This consolidation has further diminished the electoral prospect of the Congress and the Left, particularly, at many assembly constituencies in districts like Maldah and Murshidabad wherein the Trinamool would snatch some seats from the Left front in general and the Congress in particular. Hence, the bipolarity of the election has been further intensified, the fielding of many young faces by the Left notwithstanding.

Since, gender emerged as an important factor in the debates by many analysts who argued that the past record of decisive edge that Mamata Banerjee had among the women is more likely to continue and help the Trinamool retain power, we tested this perception on the ground. In our finding, we found that there was no autonomous gendered electoral response. Rather, in majority of the cases, the narrative of the women were in consonance with their locality and community.

Since we followed the qualitative method wherein having collected the expert views (various party leaders from different ideological dispensations, social activists or people who have an panoramic view of their area/constituencies) at the local level, the contested and layered narratives were collected from the common respondents who were approached through a purposive sampling that took into account the demographic profile of the respective assembly segments, an informed inference was drawn about the seat tallies. Hence, there party wise tally in the respective assembly constituencies are divided into two categories: the Sure Winnable seats and the ones where respective parties have the edge. These details are mentioned in the relevant table and the graphs. Combining these two categories, we have come up with a range of numbers which respective parties are likely to win. 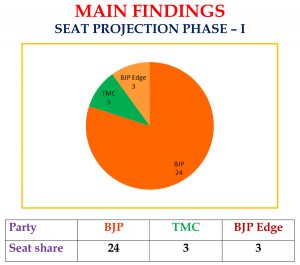 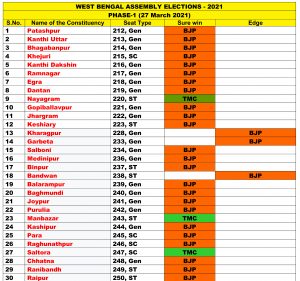 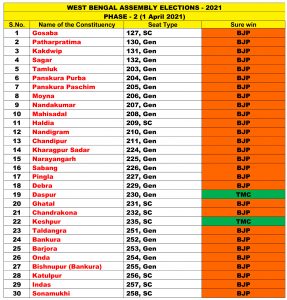 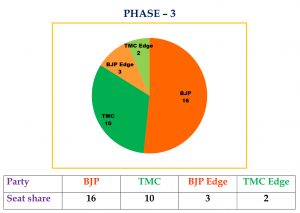 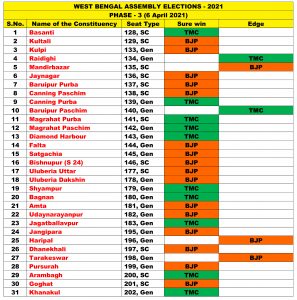 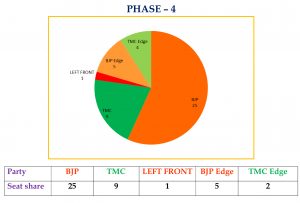 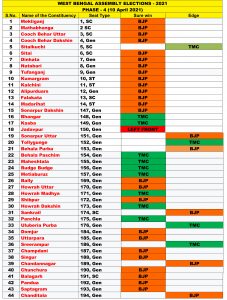 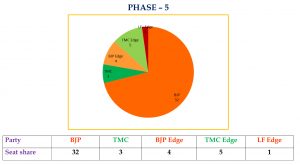 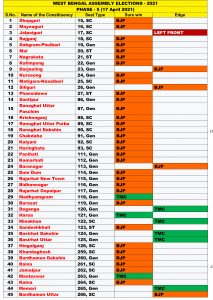 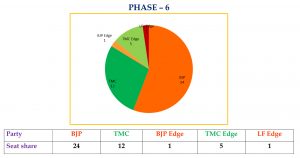 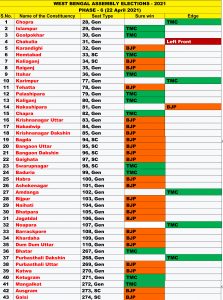 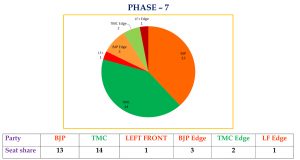 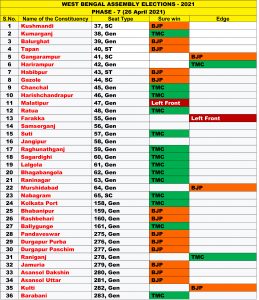 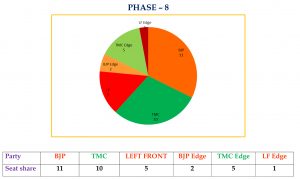 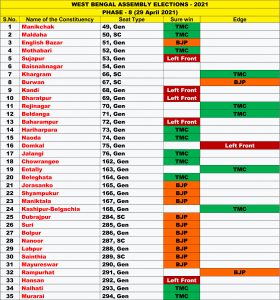 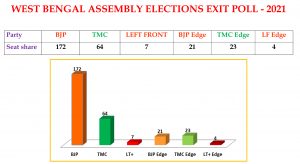